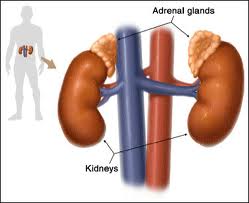 Unless you’ve been to a physician trained in natural therapies, you’ve probably never directly heard about the adrenal glands and their role in health. Essentially, adrenal gland problems, outside of pathology, don’t exist in conventional medicine, even in the eyes of endocrinologists. The main reason adrenal gland problems go unaddressed is because standard medical tests do not identify problems until hormonal levels are greatly altered, most often due to some pathology of the glands or reaction from a medication. There are a few reasons why medical tests are insufficient, and typically a waste of time and money, when it comes to evaluating the health of these hormones. 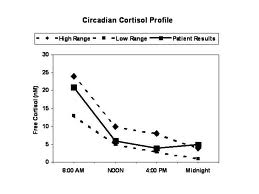 First, as discussed in Part I,  is that the adrenal glands release their hormones in a circadian rhythm, which is a 24-hour cycle. The hormonal levels should normally be highest in the morning around 6-7am and lowest at night around 11pm-12am. So it’s normal for your hormonal levels to fluctuate throughout the day; actually if they don’t then you’ll have problems. When a person has their adrenal hormone levels checked (typically cortisol), and the results come back as “normal”, all that means is that the level was normal for that specific time of the day. It’s very common for someone with adrenal gland dysfunction to have certain times of their circadian rhythm impaired. Just because a blood test at noon says everything is fine doesn’t mean that they’re working well at 8am or 10pm.

The second reason that medical blood tests often miss adrenal gland problems is that the standard medical ranges for “normal” are expanded to such lengths that there has to be a great overproduction or under production of hormonal levels to be flagged as abnormal. So with such wide ranges, it’s hard to fail the test.

The third reason has to do with the actual blood tests when it comes to testing the hormonal levels, and this holds true for other hormonal levels too, particularly sex hormones such as testosterone, estrogen, and progesterone. Blood labs are testing for the total blood-bound hormone levels which do not have a significant influence on the body’s tissues as the unbound free hormone levels. This means that checking blood levels often does not reveal a problem because it is looking at the total amount of hormone in the bloodstream which again, isn’t often a factor until the patient is in dire health. The free hormone levels, which today can be easily and accurately (and affordably) measured through saliva, tend to be much more indicative of the individual’s true state of hormonal health as it is testing the free levels, (approximately 8-10% of the total), which are actually having an effect on the human body and overall health.  And, due to the circadian rhythm of all hormones, saliva testing allows for testing multiple times at home to get a total picture of a gland’s function throughout the day, rather than a single spot-check.

Next in Part III, I’ll discuss the many interactions of the adrenal glands with other hormones, and their influence on overall health.