Home / Health Articles / Immune Health / Pollen Getting You? Get Over Those Allergies Here in North Carolina the pine pollen is out with a vengeance. Sneezing, bloodshot eyes, itchy skin, and asthma symptoms are the most common complaints athletes present with. Ever wonder why you suffer certain allergy-related symptoms and some people don’t? Well, there are a couple reasons you may be more allergic than you need to be. It’s hard to entirely avoid the pollen, unless you live inside and in a bubble, but taking charge of your health can help tremendously.

Individuals with allergies tend to have run down adrenal glands. Your adrenal glands are those walnut-sized glands that sit on top of each kidney and make up part of your endocrine system. They secrete adrenalin and cortisol in response to stress – that could be emotional stress, nutritional stress (poor diet, going too long without eating), or physical stress (body pain, injuries, exercising too hard). They also make a hormone called aldosterone that is responsible for electrolyte balance in your body and helping you stay hydrated and regulating your blood pressure. Your adrenal glands also make the hormone DHEA which is necessary for a healthy immune system and normal levels of estrogen and testosterone.

If you’re under more stress than you can handle, your adrenal glands will pay the price. They’ll initially produce too much cortisol and that will result in blood sugar handling problems, poor sleep, and poor concentration. DHEA will shoot lower and that means low libido (sex drive), fatigue, and lack of performance – while exercising, working, and in bed! If you’re still exercising hard and too anaerobic, or not eating well, (too many refined sugars & too much caffeine are major adrenal gland stressors), or under too much mental stress, your cortisol levels will eventually drop too. During these phases of adrenal fatigue and exhaustion, allergies tend to either show up, or get worse if you already had them.

So what can you do? Adjust your stress levels and start exercising and living more aerobically. For a period of time you may want to exercise more indoors until the air clears up some. You may also try removing foods from your diet as many people who have environmental allergies do so because their body is already overwhelmed from something they’re eating. So they are producing a lot of histamine all the time, and the pollen, dust, mold, ragweed, or other environmental condition is adding to the problem. First try eliminating all gluten (wheat, rye, barley, and some oats), from your diet. This is a very common food allergen – it is said that 1/6 of the population cannot tolerate gluten. Dairy products and the main dairy protein casein would be the next to eliminate. This is also a very common food offender. Stay away from anything that has cow milk and calcium or sodium caseinate in it. Often it takes at least a few weeks of 100% avoidance to see a change if you are allergic to a food, but sometimes only days. Eggs, corn, soy, and the nightshades (potato, tomato, eggplant, peppers, and paprika) are other common food allergens. You may benefit from the antioxidant quercetin, which is a natural antihistamine and anti-inflammatory. This is available at most health food stores.

Another common reason for a person to suffer allergic-type symptoms is because their body is lacking the proper acid, that being stomach acid. I believe Jack LaLanne was one of the first people to note that those who are too alkaline will suffer fatigue, allergies, and inflammatory conditions such as bursitis and tendonitis.

While your saliva should be a bit alkaline (roughly a pH of around 7.0 or higher), your stomach should be more acidic, from the hydrochloric acid (HCL) it produces. Eating a diet high in carbohydrates, especially the gluten containing products previously mentioned, acts like a sponge to soak-up stomach acid, and cause indigestion, heartburn, reflux, and allergies. That’s right, contrary to what most are told, heartburn is usually from lack of stomach acid, not too much. Under stress, HCL levels decrease in the body, leading to maldigestion of food and nutrients. Digestion slows down and the food in the stomach actually begins to rot to some degree. This creates a very bad digestive environment, yet a very good medium for other [harmful] stomach acids, as well as a home for unhealthy bacteria to grow. Additionally, digestion further down the track is impaired as the body relies on HCL production to trigger digestive secretions in the pancreas, small intestine, and gall bladder.

So cleaning up your diet, managing stress, and exercising properly will not only benefit your adrenal glands but your digestive system too. Your natural stomach acid will slowly begin its production levels back to the level it needs to be as long as you aren’t taking some antacid. Sometimes you may need to help your body replace the HCL that it’s missing. You can get HCL supplements at most health food stores but be very careful taking them; not everybody who has a digestive problem or allergies needs more HCL. If you get a burning stomach after you take them you may have an ulcer or you just may not need them. As always, educate yourself about what you should be taking and why you are taking something. I could say “check with your physician”, but do they really know? Probably not. But I’ll say it anyway.

Apple cider vinegar many times helps a person with allergies too as it can acidify the tissues. Typically 1 TB a few times a day does the trick, but you may need more or less. Apple cider vinegar can also be a great treatment for hives – try 1 TB every hour, for up to 3-4 hours. Often this resolves or significantly reduces the hives in a very short period of time.

Ultimately remember that most people who have allergies can get over them if they address the root cause of their problem. And those who have some genetic predisposition to environmental allergies can typically improve them by improving their overall health. Taking antihistamines like Claritin, Allegra, and the many others out there only treat the symptoms. Investigate your stress levels and get your adrenal glands strong again. Eliminate foods you shouldn’t be eating and consider how they may be hindering your digestion and contributing to your allergic symptoms.

Additionally, try some local honey. It has been shown to significantly reduce or even eliminate allergic symptoms in many people. Just make sure it is local (so you’re eating honey made from pollen close to you) and the hives are not sprayed with any chemicals. You typically won’t see organic honey because bees can travel up to three miles in any direction to get pollen – so the bee farm would have to be pretty big. Honey is a great alternative to white processed sugar too. (Hey, I’m a beekeeper – I know what I’m talking about!) 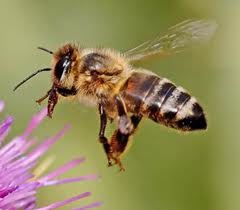