Home / Health Articles / Digestive Health / Potty Talk: Should You Give a [email protected] About Fiber? 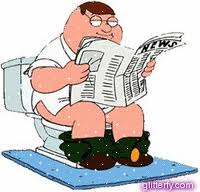 Fiber is one of those necessary components of a healthy diet along with proteins, fats, carbohydrates, and water. But fiber is also very misunderstood and misrepresented. It’s often thought of as “the stuff you need to have a good bowel movement” and nothing more. People are often told to get enough fiber in their diet and eat foods high in fiber to create a feeling of fullness to aid in weight loss and keep their cholesterol low. Actually that high fiber diet could be contributing to their health problems.

I’m not at all saying that fiber isn’t important. It is, but if you’re going through your day thinking about the 35+ grams you need to get in by nightfall to hopefully have a good bowel movement (BM), well, that’s a crappy way to live and I mean that in more way than one.

I don’t think it’s all that necessary to go too deep into fiber basics here – everybody has access to Google and Wikipedia. But I think it’s important to state the basics about fiber before I discuss what I feel are much more important things to consider when it comes to gut health and your overall health. But first:

A lot of the fiber push in our society is based on the erroneous fear that we’re all going to die from high cholesterol and the lower you can get your cholesterol the better. This is, of course, unsupported by any evidence which I discuss here – low cholesterol can be more harmful than high cholesterol. This is not to say that fiber isn’t important for healthy cholesterol levels; actually it’s very good at lowering the “bad” LDL cholesterol which is easily oxidized and responsible for diseases such as atherosclerosis. Now, unfortunately we are told by the media and many doctors that the best way to get cholesterol-lowering fiber is through oat bran and other “whole grain” products. However, these sources are often very harmful to our health, even low amounts in some people, as the excess carbohydrates outweigh the soluble fiber benefits by increasing inflammation in the body and even decreasing nutrient absorption. Additionally many people are gluten sensitive (wheat, rye, barley, and some oats).  Fruits and vegetables are the best ways to get your soluble (and insoluble) fiber.

To What Extent Is Fiber Even Necessary for a Good, Healthy BM?

I’m now in my fifteenth year of practice and I have not once recommended to a patient that they need to consume more fiber. I am always working with patients with various digestive problems ranging from bloating to colitis and everything in between. I often make dietary changes and suggestions and use various treatment therapies including nutrients to help a person’s gut heal. But never have I had to even mention the word fiber unless it was to ask them to stop taking their fiber supplement as many people don’t need them or they take too much. You see, if you eat a healthy diet then you’re going to get all the fiber you need. A truly healthy diet is discussed a bit later.

It’s All in Your Head

Here’s something that not too many people talk about – the fact that your gut is your second brain. Your digestive tract – from your mouth all the way to the other end (your anus) – has a mind of its own. The nerve cells in your gut act independently from the brain in your head but they must communicate and cooperate with one another. This is why people get stomach “butterflies” or a “nervous stomach.” It’s also a reason why people sometimes get constipation and diarrhea. Actually, constipation and diarrhea have a whole lot more to do with lifestyle factors and NOT fiber. Want to start to heal your gut and have normal, healthy BMs? It’s more about how you live, (and eat too), than the oat bran, psyllium husk, and other high fiber foods.

Here’s another fun fact for you to wrap your head, or in this case your gut, around: The majority of your neurotransmitters (brain chemicals) are made in your gut but used by your brain. So if your diet is a disaster and your gut is a mess you will have trouble making important mood chemicals such as serotonin, which is what so many people have an imbalance of leading them to seek out drugs such as Prozac, Paxil, and Lexapro to fight their depression. So if you’re popping Prozac while drinking your Diet Coke and eating Cheetos then you really have some soul searching to do. 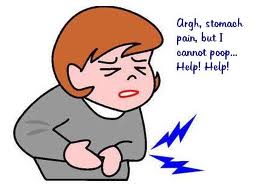 Case History:  Early on in my practice I saw this guy who was suffering from constipation. He had a BM approximately one time a week, at best. (As a side note: “Normal” is at least once a day for both men and women, though I had a woman tell me once with certainty that “only guys have BMs every day as every one of her girlfriends only goes two times a week”.) I treated the guy and discussed some dietary changes and sent him on his way with a follow-up appointment for one week later. He returned a week later and reported something very interesting. He said that after he left my office he had a BM later that day, (I have that effect on people), but then did not have another BM until five days later and then had another one on the sixth day and again on the seventh day before seeing me. I thought I had fixed his problem but really I hadn’t. What happened was on the fourth day he lost his job, which he despised, so it was actually a huge relief for him to be forced out of what he couldn’t stand to do every day. The day after he was laid off his gut issues ended. The emotional toll (stress) on his nervous system was overriding his gut’s nervous system – his second brain.

Being too stressed out – whether you’re living a lifestyle that is too emotionally draining for you, (long commute to work, long work hours, a job you hate, a boss you hate, family issues), consuming poor food, (too much caffeine, refined sugar, bad fats, artificial preservatives – Splenda is terrible for your digestive tract), or dealing with a lot of physical stress, (past or current pain and injuries, exercising too often or intensely), will all affect your nervous system as well as your hormonal system. Too much stress which accumulates over time will put you in a sympathetic overload – this is that “fight or flight” reaction you may have learned about in school. Sleep problems, body aches and pains, feeling old, sexual dysfunctions, and a host of other symptoms occur when you’re under too much stress, and yes, gut problems are paramount. Some people get diarrhea or loose stools while other people get constipated. Is the solution to consume more Colon Blow Cereal? How about more prune juice or popping  another laxative? Definitely not. The way to fix these problems is to address the cause(s) – that of your sympathetic nervous system overriding your parasympathetic nervous system – what some refer to as the “rest and digest” nervous system. You don’t try to push or stimulate the gut, (the parasympathetic), when you’re sympathetic dominant; that’s like trying to blow a golf ball through a garden hose. If you have magazines or any other reading material, (including this article), in your bathroom to read while you’re on The John then you’ve got problems. It shouldn’t take you that long to have a BM. If you need to drink coffee (caffeine) to have a BM then that’s not normal either. A lot of individuals have an overactive gastrocolic reflex – which is the stomach telling the colon that food is on its way and to plan on emptying soon. So they eat something that irritates/overstimulates the reflex and the colon flushes out. Also if you take a supplement like magnesium to have a BM that’s also not healthy or normal. Yes, it’s better to take some magnesium than some other laxative and probably better than not having a BM, but don’t fool yourself into thinking that you’re correcting the problem. A magnesium deficiency won’t make you constipated, so although taking magnesium might stimulate the bowels, (as will high amounts of vitamin C), it shouldn’t be used in such a manner.

The three most important points to take from this, which you hopefully found both informative and entertaining, are:

Thanks for reading and guys don’t forget to put the toilet seat back down.