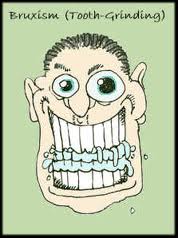 Bruxism – it’s the clenching of the jaw and grinding of the teeth sometimes to the point of actually breaking a tooth. When you’re awake and conscious the force your body can produce by grinding your teeth together is around 250 psi (pounds per square inch) in the back molars and 85 psi in the front teeth. That may seem like a lot but many are able to easily triple that pressure, achieving around 800-900 psi while they’re sleeping. This of course is when bruxism, (officially referred to as sleep or nocturnal bruxism), becomes more of a problem. And if you think it’s amazing that the body can provide that much pressure during what should be a restful period, it can even double that force to around 2,000 psi if you’re on certain antidepressant (mood-altering) medications. Pressure that high is teeth-breaking, tissue-damaging force along with a whole lot of pain and discomfort to the head, neck, and jaw region.

Though bruxism can be due to a variety of health problems, in a nutshell it comes down to one thing – too much stress to the body. At a time when your body should be relaxing and recovering (sleeping), the nervous system is actually unable to calm down into this parasympathetic (relaxed) state. Rather, it remains in sympathetic dominance (flight-or-fight); perhaps the worst time your body can be in such a state as the jaw clenches and grinds as if your body is fighting a battle for survival. Ultimately hormones and neurochemicals are altered as you’re grinding away.

The stress or life stressors which result in bruxism can be any type or combination of emotional/mental, chemical/nutritional, or physical/structural stressors. You could have one big stress – say the loss of a loved one (emotional stress), or a major physical accident (structural damage to your body), which results in bruxism either immediately or over time. You could also have several smaller stressors that add up over a period of time and eventually affect your sleep either with insomnia, restless sleep, or bruxism.  If your diet is high in refined carbohydrates and caffeine, you have a high stress job, and you have some health problems to add to the list, then bruxism may be the way your nervous system tries to deal with this stress when you finally try to get some shut-eye. Antioxidant depletion is also common in those who are under too much stress, especially dietary stress. Not only does this impair overall health but there is an association with sleep problems such as bruxism. High levels of anxiety, antioxidant depletion, and bruxism all tend to run together.*

Bruxism is even associated with taking certain medications. Interestingly enough these same medications which are thought to help one deal with stress can be the same trigger for more nervous system stress and bruxism.  Then again, if you “need” a certain medication there is almost always a health problem in the first place.

There is a strong link between certain drugs, particularly the neurotransmitter-type (antidepressant) drugs, with bruxism. These are the medications people take for depression, anxiety, addictions, and other mental health related disorders. As mentioned, the pressure a person can elicit on certain medications can easily push nine times or more than what they can consciously achieve. As you may realize, those who take these types of medications are already under a certain amount of stress as it is – or else they would not need these drugs in the first place.

As with everything in the human body, it’s all about balance, and neurotransmitters are no different. These chemical messengers provide so many functions from shaping our personalities to affecting each and every mood and feeling we have throughout the day including how we interpret pain. The balance is between excitation (“the uppers”) and inhibition (“the downers”). Often those who feel the “need” for some drug support or are prescribed such by their physician have too much excitation and lack inhibition so they’re given a drug to help try to create some balance out of the imbalance. I stress the word “try” because the full mechanism of action of these drugs is still unknown and some researchers feel as though the majority (70% or more) have a placebo effect. Dietary excitotoxins such as MSG and aspartame are thought to incur an excitatory prevalence in the body, resulting in stress which can then produce symptoms such as bruxism.

There is a definite link between diet, depression/anxiety, and antidepressant use, particularly with the common selective serotonin reuptake inhibitor medications, commonly known as SSRIs. The majority of serotonin, (90%) is produced by cells which line the digestive tract, so eating foods which impair digestion can easily affect serotonin production and therefore result in stress to the nervous system and bruxism. It is known that bruxism can occur from taking SSRI medications* (called SSRI-induced bruxism) such as Paxil, Prozac, Celexa, and Zoloft, as well as drugs which also affect the dopamine pathway.

Restless leg syndrome (RLS: akathisia) has been associated with nocturnal bruxism as they both are linked with imbalances in the neurotransmitter dopamine.* Whereas RLS affects the legs often due to low dopamine bruxism affects the jaw often from high dopamine levels. Dopamine is a reward-driven and pleasure type of neurotransmitter and imbalances are linked to addictive personalities and those with attention deficit disorder (ADD & ADHD). Actually, some studies show that those taking medications for ADHD have a higher prevalence of bruxism* than those not treated with such medications for their ADHD.

When someone is under too much stress they tend to turn to caffeine for its stimulatory affect so they can continue to push through their day. Along with the caffeine are chemicals in these products (coffee, tea, cacao) which act as central nervous system stimulants, providing a further “get-up-and-go”. The problem here is that those who use caffeine and such products typically abuse them to the point where they begin to have other health problems such as hormonal, neurochemical, sleep and memory issues – all of which can then result in bruxism.

Grinding Teeth and the Military 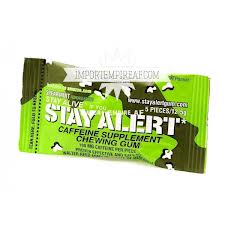 I have personally learned of the problems with bruxism in the military through several meetings with a dentist who specializes in the production and fitting of a branch of the military with oral orthotic devices, commonly known as bite splints. Many people know at least one person who is in the military and perhaps you are one yourself. The stress these individuals are under, especially if they’re in a combat situation, is one which few can comprehend unless they have been in such a situation. Though the teeth may be the last thing a solider is concerned about,  there is a huge bruxism problem in the military.

Those in the armed forces often are under high physical and mental stress and are provided inadequate nutrition. Adding to this stress is a huge amount of caffeine intake per individual. Most soldiers consume more coffee, tea, and high caffeine/high sugar energy drinks by noon than most should consume all week if not longer. Then to help deal with all the physical, emotional, and nutritional stress, many are prescribed an antidepressant drug (Wellbutrin is common which slows down the reuptake of dopamine) which then kicks the bruxism into full swing to the point where they’ll quickly break down their night splint or their teeth if they don’t wear it. 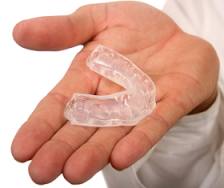 Often when I see a patent who grinds their teeth they already have been fitted for a night splint. These devices are typically fitted by a dentist though you can get one at any drug store (not a good idea unless that’s your only option). Many people don’t even realize they grind their teeth until their dentist  sees some wear and tear or perhaps their significant other sleeping next to them has told them they sound like a machine factory whose gears need oil.

Understand that these night splints don’t correct any problem – they hopefully keep you from ruining your teeth and maybe also take some stress off your jaw and cranial muscles. Unfortunately many night splints are made incorrectly by those in the profession. As my dentist correspondent likes to say – it’s like “putting a rectangle into a triangle”. For every 1mm the teeth are separated in the back (your molars) the front teeth then separate by a factor of three. So for many, wearing a splint with the same thickness throughout its entirely can cause more problems either immediately or in the future. Actually this is not as uncommon as it may sound since it is the common practice to make splints in such a way. Typically within 72 hours the body begins to adjust to the new splint often by grinding into the splint to create a more proper fit. It may a good idea to have your splint re-fitted every few years or sooner if you notice excessive wear or breaking points in the splint. Last year I saw a woman with sleep problems that were solely from her night splint. The back part of one side had broken off but neither she nor her dentist thought it was a problem. I helped her realize this through the testing procedures I use in my office and as soon as she was fitted for a new splint her sleep problem resolved fully and immediately.

To get to the source of the bruxism you need to deal with the stress or stressors at their source and not try to cover up the problem with medications, other drugs (such as caffeine), or other symptom-based treatments. This means figuring out what the stressors are and correcting them whether it’s your diet, mental stress, or any health problem, including medication use (yeah – ask (or inform) your doctor).

Prevention is always easier than resolving a chronic bruxism problem, that’s for sure. Though bruxism can be resolved it is typically not a simple fix; unfortunately it is common to continue to grind your teeth and keep grinding them even after health improves; it’s not an overnight process as the nervous system can get stuck in this stress pattern. But like most health issues there is a reason for everything and your body can and will heal given some time, persistence, and full dedication to the problem.

* Click link to see studies mentioned if you’re the nerdy-type.