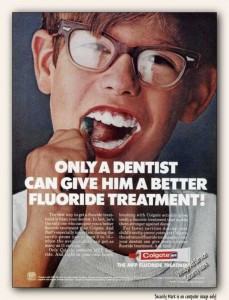 There was a news report out recently on the increase of fluorosis in kids. That means they’re getting too much fluoride, mostly from water, soda,and juice, but also from toothpaste, mouthwash, and yes, the dentist. It’s estimated that 41% of kids age 12-15 have it and 30% under age 12 do too. I’d say that’s a lot. Interesting though is that the “experts” say that getting too much fluoride (fluorosis), is not serious as it’s only a cosmetic condition that results in tiny white flecks or streaks on teeth and it can be treated with whitening procedures. Who believes that? (Probably most people.)

Fluorine, as well as bromine, chlorine, and iodine are a group of elements known as halogens. Consuming too much fluoride, chloride (from water sources), and bromide (high in bread, cereal, pasta, soda) competes with iodine, a necessary mineral for thyroid hormone production, energy production, as well as health of the ovaries, uterus, prostate, and breast tissue. Iodine is also necessary for a healthy immune system.

So yeah, too much fluoride is not a good thing, regardless of what your teeth look like. On January 7, 2011 the EPA released an announcement to lower the recommended fluoride levels in municipal water supplies. But if they really cared, they’d get rid of it entirely. The World Health Organization (WHO) has shown no difference in cavities in those living in countries with fluoride in their water, compared to those who do not have it in their water supply. And the fluoride added to water is not “natural” like you may find in very doses in some foods and ground water – it’s a byproduct of industrial manufacturing, and it’s toxic.

So enough of the fluoride. My kids have never had it and they have never had a cavity. It’s not in our well water, our toothpaste, and our dentist doesn’t use it. I’ve seen a few kids over the years given fluoride pills from their dentist because they drink well water with no fluoride in it. That’s absurd to say the least. In every instance the kid is toxic in the fluoride. But the same goes for adults. It’s not needed in your toothpaste or water or anything else you’re consuming. Your teeth are a great reflection of your health and diet – a diet in refined carbohydrates (sugars and juices) and low in minerals such as calcium and especially phosphorus, as well as poor health from too much overall stress – has a whole lot more to do with cavities than fluoride. Keep it at the industrial plant.