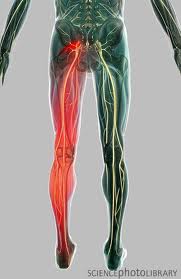 Many people suffer from hip pain, back pain, piriformis syndrome, and what is thought to be “sciatic pain”, which is often not true sciatica, but another type of pain known as sclerotenogeous pain. Hip flexion problems are very common in runners and those who use their bodies to jump and kick. Extension-type pains are very common too and can cause pain when you sit, walk, and climb stairs.

Your sciatic nerve is a thick nerve originating from many fibers in the lower back and sacral area. Actually it’s the sensations in the lower leg & foot – weakness, pain, numbness – that are typically true signs of “sciatica” symptoms as the sciatic nerve comes out from behind the knee and branches out into the tibial nerve and common peroneal nerve where they supply movement and sensations to much of the lower leg and foot. Pain above the knee – usually referred to as sclerotenogeous type pain – is pain originating from a muscle, tendon, or ligament. That is usually what is causing pain in the lower back and hamstring/thigh area, if not a local muscle or tendon strain. Though there may be disc involvement as well as other nerve related problems, (other than sciatica), most lower back, thigh pain, and hip pain is from muscular imbalances as well as inflammation in the body.

The muscles discussed in the accompanying video have significant involvement in the stability, strength, and movement of the lower back, hip, and legs.

Piriformis – this muscle  extends from under the front side of the sacrum and attaches to the greater trochanter in the upper leg. The major action is to laterally rotate the hip as well as turn the foot out. The sciatic nerve actually comes out right under the piriformis, but in 15-20% of people, it goes through it. “Piriformis syndrome” irritates the sciatic nerve. An imbalance in the muscle often causes pain and  can cause the foot to turn outwards. Since the pirformis muscles stabilize the sacrum and therefore the base of the entire spine a person can have pain all the way up to their neck or down to their foot from a piriformis issue.

Gluteus maximus – this powerful muscle extends the hip and rotates the thigh laterally a bit too,  just like piriformis. Many people think they’re having hamstring pain or hip pain from a bad disc, when really it’s because they have a glut max that isn’t functioning properly. Also, a lot of knee pain is because of a strained glut max. This muscle also makes up a significant amount of the ITB – another common injury I discuss here.

On the front side of the body are the  psoas and abdominals muscles and they are often involved in low back pain, hip pain, sciatica, and disc problems. Leg flexion, hip rotation, and the ability to reach down and touch your toes is made possible by the action of these two muscles. So pain performing these movements means that they are not working correctly. Can’t sit up because of pain or weakness from laying on your back? Pain putting on your shoes or flexing forward to pick something off the ground? Pain running, jumping, or kicking? Psoas and abdominal involvement.

No stretching! No orthotics!