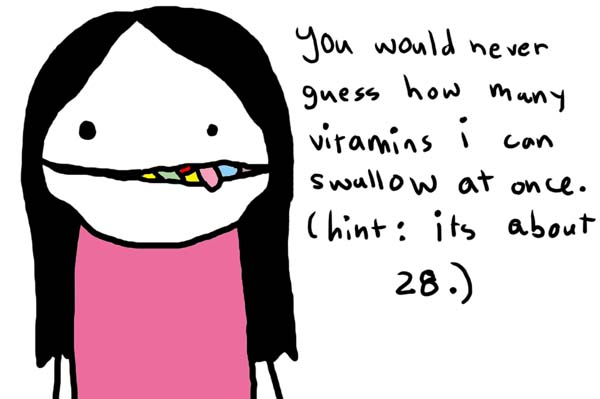 6) Multi-Type Supplements: People love to take their “multi-vitamins” even though most contain minerals and a host of other ingredients such as herbs, amino acids, and sometimes stimulants. The idea that a multi will give you the insurance you need for the nutrients you might not get throughout the day is a huge misconception for many reasons. First, you have to hope that you are getting what is actually listed in the product. Since nutrients are not well regulated, (which has its advantages and disadvantages), most of the low-end cheap products probably don’t have what you think they do. Companies only have to disclose what they started with when making the supplement, not what it ends up with (what is actually in the product). Then you have to hope that you absorb it well, which again, with most poor quality multi-supps out there, good luck. The binders, fillers, synthetic and poor form of minerals, such as calcium carbonate, will be sure to increase the value of your urine sample so you can one day compete with oil on the NYMEX. And if that doesn’t make you question your multi, consider the most important reason of them all even if you are taking one from a reputable nutrient company – your body doesn’t like multis – just like it doesn’t like you stretching and wearing orthotics. It’s all about balance in your system and raising the level across the board will provide no benefit unless there are a significant amount of low nutrient levels in the body and you can match a multi to increase those low levels WITHOUT increasing the nutrients already at desirable levels.  Your body will function much better with sub-par but balanced nutrient levels than it will if you have all of them normal but one low; the multi won’t bring up the low level into balance. I see often a patient show a need for a nutrient yet they are already taking it as part of their multi-supp. When we get rid of the multi and isolate the problem things start to improve. Now there are multi-supps out there that are whole food types – freeze dried fruits, veges, and some even with animal parts in them. For the most part, they are good. They don’t give you the 100% or higher of the RDA, but they contain all those known and unknown phytonutrients (antioxidant type substances) that are great for your health. Companies like Centrum, Kirkland and the other Sam’s Club types, drug store varieties, all those liquid multis and especially anything with the name GNC on it – I’d say they’re great for your garden but you just might kill your plants.

7) MSG & all those hidden words associated with it: This article on excitotoxins that I wrote in November 2009 was one of my most popular, and I still think it’s one of the most important. Most people know about MSG. What they don’t know is that everybody is sensitive to it, not just the person who gets a headache after eating Chinese food, and there are plenty of hidden names for MSG. So yes, you’re probably consuming it, even if you only shop and eat at Whole Foods – after all their whey protein powder is loaded with it, though it says it nowhere on the label. What’s going on there? Aside from the fact that Whole Foods is becoming less and less of a health food store every day, they, along with many other companies, either don’t know, or don’t care that they’re creating vast amounts of MSG during processing. Seeing words like hydrolyzed, caseinates, autolyzed in your food? Yum…MSG. Check out the article for the complete breakdown and the list to learn.

8) Agave, artificial sugars, and the “natural” ones too: In this no-carb/low-carb society we live in people are swapping their sugar cravings for the no calorie sugar substitutes and feel like they’re getting away with it. I’ll continue to pick on Whole Foods and other health food companies that love the “ols” – xylitol, maltitol, and sorbitol. These sugar alcohol substitutes are still a problem, even though they are natural. Humans aren’t meant to consume the amounts found in food products. The other sweeteners – aspartame (Nutrasweet) and sucralose (Splenda) are even more of a problem. Aspartame is an excitotoxin so it acts just like MSG – an excitotoxin. You can read about Splenda here, as well as those “ol” sugars.

What about Agave? – get rid of it. It’s processed and contains more fructose than high fructose corn syrup. Agave should be banned – there is nothing good about it – yet the market is huge. It’s a major health food scam of the past many years. Use honey – hopefully local and organic. I always see patients respond well to honey, never to agave. And since I know you’ll ask – Stevia? Well – a bit here and there is okay.  It’s the only no-calorie sweetener that in small amounts I’d let pass. I don’t use it, but I don’t think it’s terrible.

9) Hydrogenated fats, and the vegetable oils too: This one hopefully doesn’t surprise you much, especially the hydrogenated “trans fats” oils. Trans fats are slowly being eliminated from most foods which is a good thing, yet they’re just being replaced with non-hydrogenated vegetable oils which is still a bad thing. People hear the word vegetable and they figure it is good, when in all actuality vegetable oils (omega 6 fats) – primarily corn, soy, safflower, and peanut (no they’re not all really vegetables), are highly inflammatory, especially in their refined cooking state. What should you cook with? – at low temps, under 325 – organic extra virgin olive oil. Over 325 – organic unrefined coconut oil, organic butter, or organic lard. What about canola? I don’t recommend it or ever use it. It’s highly industrialized and processed, contains a lot of omega 6s, and with the slight benefit of the high omega 9 monounsaturated fats, you’re better off with olive oil. Leave your canola with your agave.

10) Animals on steroids, and most fish: If the animal is on steroids, so are you! Not only are most farm animals (beef, lamb, pork, poultry), given hormones to increase their size and market value, they’re still being fed antibiotics and a host of other drugs to keep them alive long enough to kill. Your chicken and dairy are the most affected – always make sure your chicken, eggs, milk, butter, and cheese are organic – or at least free-range, antibiotic and hormone free. It’s a must for those foods. Turkey and beef is not affected as much but if you can afford it, it’s worth it. Pasture-fed (grass-fed) beef is one of the best foods you can eat today in regards to its nutrient, protein, and beneficial fat value.

How about fish? Once a month at most – and never any big fish like shark, swordfish, or dolphin (haha – well, you’re hopefully not eating dolphin, but hopefully you saw the movie The Cove and that maybe convinced you how bad fish really is as well as those dolphin encounters at vacation resorts). Most fish is loaded with mercury, primarily from the coal plants throughout the world. Farm raised fish is typically worse – they are loaded with antibiotics and hormones just like land-farm animals, along with mercury. Some even have both male and female sex organs, and I’m pretty sure that’s only a good thing if you’re looking for your own daytime talk show. Plus, our planet is over-fished; we’re eating them faster than they can reproduce. And wasn’t there something in the news about some oil spill in the Gulf last year? Oh yeah, well that’s gone and they may want you to forget but remember the tons of oil dispersant that is still there, and may always be there. BP is not a B-vitamin.