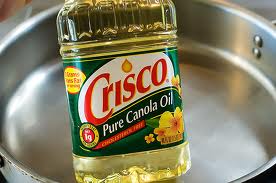 Canola oil is a staple in most homes, especially in North America. The fatty acid make-up of the oil appear to make it ideal for cooking and is said to have health benefits due to its high level of monounsaturated fats (61%) and low level of saturated fats (7%). Even Whole Foods Market uses canola oil in just about everything they make, and a lot of what they sell. But they also use a lot of agave (which should be avoided), and most of their products now contain added sugar and wheat ingredients, which should be limited in every healthy diet whether you’re allergic or not. The Canola Council wants you to believe that you shouldn’t be without a bottle of canola oil close by; and they’ve even created a website for it to convince you so, just like the Corn Refiners Association has done for high fructose corn syrup, as I discuss here. But before you believe all the hype about how great canola oil is, take a step back and look at the history and production of canola oil and why it may not be ideal, or even recommended for human consumption.

Canola oil is made from the hybridization of rape seed. The rape plant (Brassica rapa or Brassica campestris) is a close relative of broccoli, cabbage, mustard greens, and kale. In its original form, rape plants produce a seed oil that contains high levels (20-50%) of a 22-carbon monounsaturated fat called erucic acid that has been shown to cause a wide variety of pathological changes in laboratory animals. In the early 1970’s plant breeders from Canada developed a strain of rape plant that produced a seed with less than 2% of the harmful erucic acid, “safe” for human consumption.  Since rapeseed oil is not something that most would want to buy due to its name, they called it LEAR oil, for Low Erucic Acid Rapeseed. Eventually, after realizing that LEAR oil wasn’t selling well, they changed the name again to the now familiar canola oil – CANadian Oil Low Acid – since most of the rapeseed plant at the time was grown in Canada.

Initially, the Canola Council of Canada had problems getting GRAS (Generally Recognized as Safe) status by the US Food and Drug Administration in order to market their oil in the US but it was finally granted in 1985. It is rumored that the Canadian government spent $50 million to obtain it. Even though canola oil now has GRAS status, no long-term studies on humans have been done, yet supporters state, “There is no credible scientific evidence showing that canola oil is harmful to humans.”

Since canola oil mimics healthy properties of other oils, including omega-3 fats (as found in fish & flax), and monounsaturated fats (as found in olive oil), proponents feel as though they had made a dream-come-true product. Canola oil eventually began to appear in the recipes of health books such as those by Andrew Weil and Barry Sears. The popularity of the Mediterranean diet and olive oil at the time was spreading and many were beginning to substitute their olive oil for canola oil. It was rumored that most major publishers would not accept cookbooks unless they included canola in the recipes.

But here’s the main problem with canola oil, and why you should think twice before using it – canola oil is highly refined. Like high fructose corn syrup that is not “corn sugar” once it is extracted and processed, canola oil also has to go through a similar regimen. The oil is removed by a combination of high temperature mechanical pressing and solvent extraction. Traces of the solvent (usually hexane) remain in the oil, even after considerable refining. Canola oil goes through the process of caustic refining, bleaching and degumming – all of which involve high temperatures or chemicals of questionable safety. And because itis high in omega-3 and 6 fatty acids, (11% and 21% respectively) which easily become rancid and foul-smelling when subjected to oxygen and high temperatures, it must be deodorized. The standard deodorization process removes a large portion of the omega-3 fatty acids by turning them into trans fatty acids. The Canadian government lists the trans content of canola at a minimal 0.2 percent, but it is speculated that they are actually much higher due to the processing. This processing is much different from that of olive oil, which most often is first cold pressed to reduce the oxidation of the oil. Harmful chemicals and fatty acid-altering processing means do not occur with olive oil as they do with canola oil.

Another major problem with canola oil is that 80% of the acres sown are genetically modified canola, and it’s not the GMO type of product that has been developed for the benefit of the species of plant, but for the benefit of the herbicide. First introduced to Canada in 1995, genetically modified canola has become a point of controversy and contentious legal battles as Monsanto’s “Roundup Ready” herbicide allows farmers to drench both their crops and crop land with the herbicide so as to be able to kill nearby weeds (and any other green thing the herbicide touches) without killing their crop. The effects of this herbicide on the environment as well as the health of individuals who consume the products have been questioned. (Read more on pesticides and herbicides here.) Superweeds have begun to develop, and much like the overuse of antibiotics, eventually a resistance to the chemical builds up, and a more powerful one must be used. Monsanto is already working on a stronger herbicide (called SmartStax) which they hope to debut soon.

So should you be using canola oil? I say, definitely not. Doing so is risky because you’re consuming a product which is highly refined during the processing to obtain the end result (even more so than agave syrup because oils are so much more sensitive than sugars). It’s loaded with herbicides (unless you buy one that is organic), and possibly hydrogenated fats (definitely refined fats). Either way, remember that all oils high in polyunsaturated fats (those are the omega 3 & 6 fats) are very sensitive to light and heat, and therefore can’t be heated too much, even though it is what most people do with them – cooking. The reason canola oil’s smoke point is so high (over 400 degrees F) is because it is so refined. You can’t heat a healthy unrefined oil/fat very high without denaturing it.

There is no reason to have canola oil in your house. Unfortunately you’re probably going to get more than you should be consuming just by eating at restaurants, boxed goods (even “healthy” organic varieties) and shopping at places like Whole Foods, who sadly support the canola oil movement. Obtain your healthy monounsaturated fats from organic extra virgin olive oil and use organic butter and coconut oil for stir/pan frying. As discussed in previous posts, too many omega 6 fats, in the form of corn, soy, safflower, canola oil, and others result in excess inflammation in your body, not a reduction of. So reduce or eliminate those oils high in polyunsaturated fats – the blue bars in the graph below. 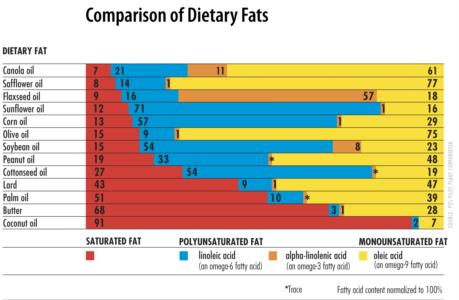