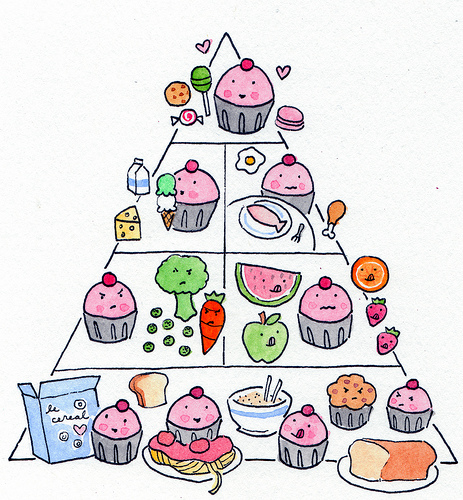 Recently several school cafeterias have hired food behavior scientists to hopefully help improve kids’ lunch choices and battle the ever-growing problem of obesity in the United States.  They’re using tactics such as hiding the ice cream and other snacks and offering salads with regular meals.

It’s a positive step, (because they’ll just never look in that freezer that says “Ice Cream” if they have to dodge a scary salad bowl), but I believe most of the problem still lies in poor education about healthy eating. Kids, as well as adults, are still being taught this crazy concept of the Food Pyramid and its relation to healthy eating. The pyramid is greatly flawed and although using it as a guide is better than eating a sticky bun for breakfast and Hamburger Helper for dinner, it is by far anywhere close to healthy. Here’s the breakdown of the pyramid, and how to build your own all by yourself.

The base of the Food Pyramid is exercise, which is great advice even though it doesn’t qualify as a food. The base signifies the most abundant of the entire contents, which many would argue should be water. Yet the only liquids the pyramid discusses are fruit juice and milk. Water should be just that – water – not sweetened with anything except perhaps natural fruit flavoring.

Grains continue to make up a large part of the pyramid. Cereal and pasta are still included even though they note more should be from “whole” grains, and “whole” doesn’t necessarily mean it’s unprocessed. Truth is that grains should be a very small part of the diet, and often entirely omitted from daily intake. Grains, especially those not “whole” like pastas and most bread, have little to no value in the diet other than calories, a minimal amount of fiber, and nutrients that are typically added after their natural sources are stripped away during processing. Most cereals, many of them terrible for your health, such as Lucky Charms, boast the “whole grain” label on their box even though they are highly processed and loaded with sugars, colors, and preservatives. But it gets it place in the Food Pyramid; good luck finding a farmer who says, “I grow Fruity Pebbles on my land.” Grains can be considered during high intensity exercise days and those who exercise very frequently. By that I mean anaerobic activity (not aerobic) and those exercising aerobically many hours per week, perhaps 10+ hours. (Refer to the Athlete section to learn more about these concepts.) On those days, minimal amounts of whole grain rice, sweet potatoes, and oats may be fine, in additions to getting extra carbs from fruit. Even white potatoes, corn, and quinoa are okay too after a long or hard workout. But again, for the majority of people, they should be avoided. If you’re craving carbs, especially after working out, then it’s because you burned too many sugars for energy. That means you were anaerobic (and not aerobic and burning primarily fat). Additionally, many people are sensitive to or severely allergic to gluten, which is found in wheat, rye, barley, and some oats.

Fruits: Canned and dried fruits are still listed with fresh fruits, though they’re far from equal. Most canned fruits contain sugary syrup and those that don’t still have lost huge amounts of nutrients in the processing. Dried fruits should be avoided by most since they are too sugar rich and often have even more sugar added to them, as well as sulfites for preservation. Many people are sensitive to sulfites which are also sprayed on some salad bars to preserve freshness and often added to wines (as well as naturally present in most). So no, raisins and a glass of orange juice and canned peaches don’t equate to a cup of fresh organic raspberries.

The oil & fat category is the most disturbing of all. It’s a thin little line meaning it should be “limited” and butter is touted as bad, (and still mentioned with shortening – a trans fat), yet vegetable oils are good. This health advice is scary to say the least. Butter provides necessary saturated fat in the diet as well as essential nutrients like vitamin A. If you get butter from grass fed cows it even contains conjugated linoleic acid – a beneficial fat also found in eggs as well as kangaroo meat. I didn’t see kangaroo carcass on the Food Pyramid; it would spice it up a little. Vegetable oils, which are primarily omega 6 fats and found in oils such as canola, corn, soy, and safflower, are NOT good for you. High levels of omega 6 fats increase inflammation in the body and, when there are high levels of insulin resulting from a high carbohydrate diet, (most of these fats are found with such), they contribute to obesity and countless health problems. Omega 6 fats are necessary though, but should be consumed from nuts and seeds. Simply put – yes to almonds, cashews, macadamian, walnuts (which contain some omega 3 fats), pecans, sunflower seeds, avocados, and even peanuts to some extent. Yes also to unrefined sesame seed oil (don’t heat it!), extra virgin olive oil, coconut oil/butter, and yeah real BUTTER. No to the other oils, any trans/hydrogenated fat, and any oil used in deep frying. The kangaroo meat is your call.

Moving on to dairy – which is the milk category. If you think about it, it’s a bit strange that milk gets its own category. Why not citrus fruits? Why not herbs or spices? Why not kangaroo and other wild game? (I’m sticking with the theme here.) Well, the dairy industry is powerful and they continue to scare people into thinking that their bones will become brittle if they don’t get their calcium from milk – though very little of it is actually absorbed from cow milk. The Mighty Pyramid says stick with low or fat free – I’m not sure why. As you remove the fats from dairy you actually increase its glycemic index and therefore get more of an insulin response and that contributes to weight gain, inflammation, pain, and many other health problems. Not giving a developing child whole milk (milk fat) has been shown to negatively affect hormone levels – specifically boys have lower testosterone levels. I’m not a huge fan of milk anyway due to the pasteurization and homogenization process. Pasteurization destroys most of the beneficial properties and enzymes in milk and homogenization, (which suspends the fat in the milk so it looks good on the shelf), has been thought to contribute to cardiovascular problems, particularly heart disease. My family drinks raw milk from pasture raised cows. That’s the way to go if you can get it. It’s legal in states like California but not here in North Carolina; hopefully soon it will be as there is a high demand for it. Don’t ask me where.

Next is the “Meat & Beans” category, so someone clearly thinks these two are one of the same. This part of the pyramid I speculate was added from an individual as a door prize raffle award, or maybe to embarrass them after failing a word association test. I would have gone with “Meat & Eggs.” I’m not sure how a piece of high protein steak equates to a high carbohydrate bean. Most beans, with the exception of soybeans, have higher percent carbohydrate content than protein. So they’re carbs, not protein. (Peanuts would be the exception – but more fat.) Meat, fish, pork, eggs, and poultry are protein sources and should be eaten grass fed (beef & pork), free range (poultry & eggs), and wild, not farmed, (fish – typically only 1-2 times a month). Beans are good for their fiber and mineral content, (depending on the bean), but they’re not something to consume plentifully, if at all. So eat a lot of eggs and clean meats, but easy on the beans.

So in summary – your Healthy Pyramid should be layered with a lot of clean water, plenty of antioxidant-rich vegetables, (the darker the color the better), high quality untreated & unheated oils, nuts, seeds, and protein, (meat & eggs), and throw in some spices, sea salt, and honey to top it all off. Then tweak it out as you see fit and you’re good to go.