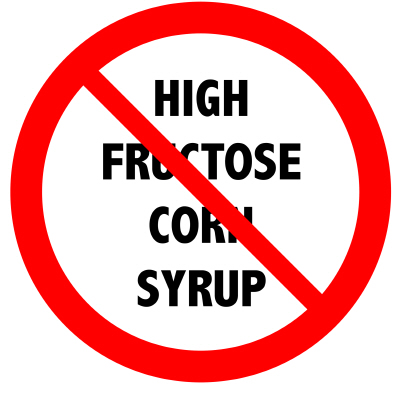 High fructose corn syrup (HFCS) is getting such a bad reputation as an unhealthy food product that the Corn Refiners Association (CRA) want to change the name to “corn sugar.” This US subsidiary product can be found in just about everything, especially processed junk foods and beverages such as soda and sports drinks. Breads, cereals, “nutrition” bars, deli meats, yogurt, soups and condiments often contain HFCS too. They say the name change is for the public’s benefit and feel they are helping us all understand what exactly is in their food and where it comes from. They even launched a website www.sweetsurprise.com to help that “uninformed” consumer become more “informed.” Well, aren’t we so lucky to have them looking out for our best interests. Of course, they’re only going to discuss basic principles in hopes that you’ll still give their nutritional-devoid, highly refined food product a second chance. Let’s look at a few “Realities” as they call them from their site where they try to dispel those nasty myths about HFCS as if they’re comparing real unicorns to horses.

“Nearly identical” is an understatement. Your body actually is smart enough to tell the difference between a highly refined product from corn, containing free forms of fructose, and the fructose bound to glucose to make sucrose, from sugar cane or beets. During the processing, it is said that some of the fructose in HFCS undergoes changes that makes it not well recognized in the human Krebs Cycle for primary conversion to blood glucose in any significant quantity, and therefore cannot be used for energy (ATP) utilization. This is similar to the processing of naturally occurring “cis” fats into partially hydrogenated “trans” fats – they look the same chemically other than the kink where the double bond lies, but your body cannot metabolize trans fats very well. Instead, these refined fructose sweeteners are primarily converted into triglycerides (fat in the bloodstream) and adipose tissue (body fat). While glucose is metabolized throughout the body, fructose is only metabolized in the liver, without any notable insulin release. Insulin increases the release of leptin, a hormone that also inhibits food intake. Individuals who are genetically unable to produce leptin tend to be obese; low leptin concentrations are associated with increased hunger and gains in body fat. Additionally, the rapid metabolism of fructose in the liver and resultant drop in ATP levels have been linked with mitochondrial (energy) and endothelial (blood vessel cells) dysfunction, alterations that could predispose to obesity, diabetes, and hypertension.

True to some extent, but definitely not natural – it’s highly processed.  Table sugar (sucrose) is obtained by extracting sugar cane or beets with hot water, then concentrating the extract into a syrup from which solid sucrose can be crystallized. HFCS, on the other hand, goes through this process:

Step 1: Cornstarch is treated with alpha-amylase (an enzyme) to produce shorter chains of sugars called oligosaccharides.

Step 2: The mold species Aspergillus then breaks the sugar chains down even further to yield the simple sugar glucose.

Step 3: Xylose isomerase (another enzyme) converts glucose to a mixture of about 42% fructose and 50–52% glucose with some other sugars mixed in.

Step 4+: This 42–43% fructose glucose mixture is then subjected to a liquid chromatography step, where the fructose is enriched to about 90%. The 90% fructose is then back-blended with 42% fructose to achieve a 55% fructose final product. Numerous filtration, ion-exchange and evaporation steps are also part of the overall process.

What about the findings of mercury in HFCS? According to two U.S. studies, almost half of tested samples of commercial HFCS contained mercury, which was also found in nearly a third of 55 popular brand-name food and beverage products where HFCS is the first or second-highest labeled ingredient. A compound known as caustic soda, which is used to separate the corn starch from the kernel, can be tainted with mercury, and there’s no way to know whether the caustic soda used was contaminated.

This is true due to the processing step as noted above. What the corn manufactures don’t realize (or more accurately don’t want you to realize) is that the processing and refining of such a product is not identical to one that has not gone through such a process, even if the end result is the same. The most widely used varieties of high-fructose corn syrup are HFCS 55 (mostly used in soft drinks), and HFCS 42 (used in many foods and baked goods). HFCS 90, the third type of HFCS produced, is used primarily to blend with HFCS 42 to make HFCS 55.

The Corn Refiners Association further go on to state, “It is important that consumers recognize added sugars in the diet. Despite its confusing name, high fructose corn syrup is simply corn sugar – or an added sugar in the diet. It is not high in fructose as its name would suggest. High fructose corn syrup is composed of the same two simple sugars (fructose and glucose) as table sugar, honey and maple syrup.”

I don’t think it’s confusing and it is definitely not the same as honey or maple syrup just because it has the same two simple sugars in them. This statement is ridiculous. Egg protein and milk protein share a very similar amino acid profile, but they’re entirely different foods. Maple syrup is actually 95% sucrose, and although most honey has a similar concentration of fructose and glucose as HFCS depending on where the bees gathered the nectar, it is entirely different. Bees make honey through a natural process using nectar and enzymes from the honey bee itself, that’s all there is to it other than a lot of time. Honey contains nutrients and antioxidants and is more compatible to human consumption than pure fructose or HFCS. Honey also has anti-inflammatory and antimicrobial effects and it doesn’t lower salivary pH levels like other carbohydrates, especially refined sugars. I have personally never seen a patient perform poorly on honey, (unless they were allergic, of course), and have yet to see a patient do well on pure fructose or  HFCS during office testing procedures. I almost always see significant health improvements when a patient switches to honey and gets rid of HFCS and most of the fructose and sucrose in their diet. In respect to bees, they don’t perform as well on a HFCS diet, and when HFCS is heated, especially above 120 degrees Fahrenheit, it forms hydroxymethylfurfural (HMF), a chemical that can kill honey bees. This is similar to the way in which browning or frying carbohydrates produces acrylamides, a cancer-causing chemical that’s also found in many foods.

CRA: There is no scientific evidence to suggest that high fructose corn syrup is uniquely responsible for people becoming obese. Obesity results from an imbalance of calories consumed and calories burned.

Actually, it’s more than just “Calories In = Calories Out” as I discuss in this post. There can be no debate about the fact that both white sugar and HFCS, with their empty and addictive calories, are bad for you. But the real question is whether HFCS is actually worse for you—more depleting and more damaging— than ordinary sugar. Some studies that have compared HFCS to sucrose and found that they have essentially identical physiological effects. For instance, Melanson et al (2006), studied the effects of HFCS and sucrose sweetened drinks on blood glucose, insulin, leptin, and ghrelin levels. (Ghrelin is a hormone produced in the stomach and pancreas that stimulates hunger.) They found no significant differences in any of these parameters. (They were found to be equally problematic.)

In June 2010, the Journal of Hepatology suggested a link between consumption of high-fructose corn syrup in sodas and fatty liver disease. A small study published in The Journal of Nutrition suggested that fructose may make people fatter by bypassing the body’s regulation of sugars, which means it gets more quickly converted to fat than do other sugars.

Fructose has been hypothesized to cause insulin resistance, obesity, and elevated LDL cholesterol and triglycerides, leading to metabolic syndrome. One study concluded that fructose “produced significantly higher fasting plasma triglyceride values than did the glucose diet in men”.

Fructose also chelates minerals in the blood. This effect is especially important with micronutrients such as magnesium, copper, chromium and zinc. Since these solutes are normally present in small quantities, chelation of small numbers may lead to deficiency diseases, immune system impairment and even insulin resistance, a component of type II diabetes.

Ultimately it doesn’t matter what you call it – corn sugar or high fructose corn syrup or half-fructose syrup – they’re all the same. Is it much worse for you than refined white table sugar? I believe so due to how it’s processed and metabolized differently in the body. HFCS, despite that the moms in the commercial funded by the CRA advise, “high fructose corn syrup in moderation,” should be eliminated from all diets while white sugar should be limited to a certain degree, depending on an individual’s health and how their body processes sugar. Pure fruit juice should be limited too, due to its high fructose content, and it’s always a good idea to water it down if it’s very concentrated. Sugars can be very beneficial at certain times, especially during strenuous activity. Sports drinks and carbohydrate solutions containing a two-to-one ratio of glucose to fructose can increase performance and recovery in athletes. Unfortunately though, many people drink these throughout the day when they’re not even exercising rather than using pure water. Most bottled sports drinks on the American market are sweetened with HFCS, containing glucose and fructose in a closer one-to-one ratio.

How about agave? Stay far away from it. Agave “nectar” is not made from the sap of the yucca or agave plant but from the starch of the giant pineapple-like, root bulb. The principal constituent of the agave root is starch, similar to the starch in corn, and a complex carbohydrate called inulin, which is made up of chains of fructose molecules. The process by which agave glucose and inulin are converted into “nectar” is similar to the process by which corn starch is converted into HFCS. The agave starch is subject to an enzymatic and chemical process that converts the starch into a fructose-rich syrup—anywhere from 70 to 90 percent fructose. That’s right, the refined fructose in agave nectar is much more concentrated than the fructose in HFCS. It’s one of the biggest health food misconceptions currently on the market.

What’s the best sweetener? I say honey. Maple syrup is also okay too for most people and some tolerate molasses well, but it depends on the processing. Your honey should be local and raw and come from a hive that hasn’t been treated with any pesticides or other chemicals. The darker your honey, the more nutrients it contains. Next year I’ll be eating honey from my own three hives as shown in the photos below. That’s nectar in the cells of the left photo. Soon the bees will cap it off with a little bit of wax as is shown in the right photo (white parts on the outside of the frame) which will soon be honey. The yellow & brown stuff in the other cells of the right photo is pollen. You can’t get any more natural than this as a sweetener, other than pure fruit, which is also fine to some extent. Keep your fruit intake to no more than two to three servings/pieces per day as it is still a high carbohydrate food containing mostly simple sugars glucose and fructose – yeah, just like HFCS, but not quite. 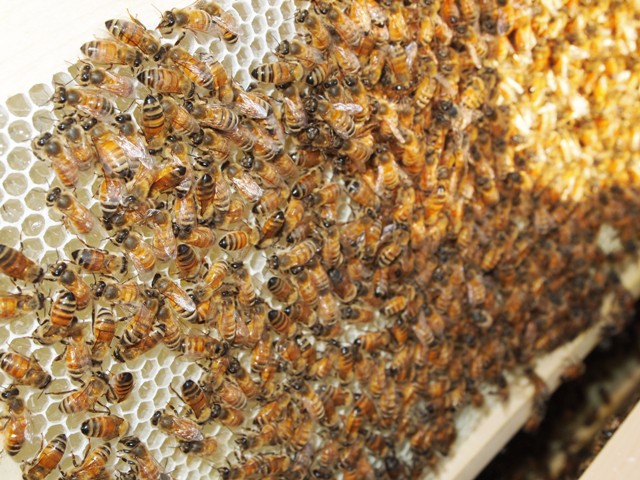 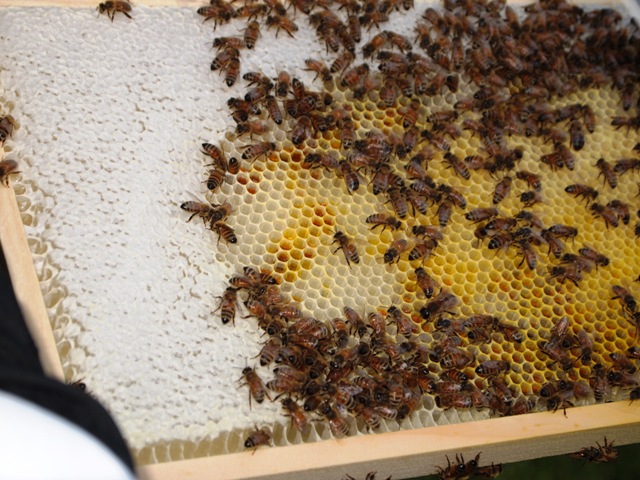